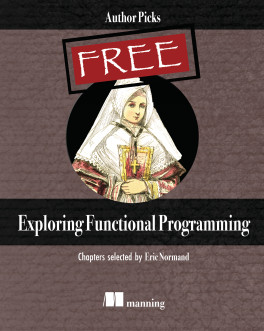 Exploring Functional Programming you own this product 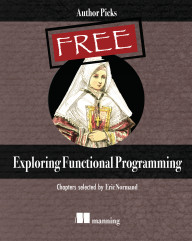 Look inside
Modern software is complex. Functional programming helps you simplify some of that complexity. You’ll find that functional code is easier to read, easier to reason about, and vastly superior for concurrency than object-oriented programming. But to really grok FP, you often need a complete mindset shift from what you’ve done before. This free mini ebook will help you start wading into the waters of FP, and get you ready for a deeper dive!

Exploring Functional Programming features four chapters from Manning books, hand-picked by author and functional programming expert Eric Normand. In them, you’ll discover the major distinction between FP and other programming paradigms, see the FP mindset applied to real-world problems, and explore the “irresistible appeal” of function purity. You’ll also examine the benefits of using immutable values as well as the dangers of mutability and how to conquer them.

Eric Normand is an expert software developer who has been an influential teacher of functional programming since 2007.

Enrico Buonanno studied computer science at Columbia University and has over 15 years of experience as a developer, architect, and trainer.

Michał Płachta started using Scala commercially in 2014 and has been an active contributor to the Scala and JVM communities since.
customers also reading
This book 1° 2° 3°