100% Complete
Getting Started with Actix read this article now at
Manning's Free Content Center
Resources
Source code Book Forum Source code on GitHub Getting Started with Actix 🎙️ Rust Servers, Services, and Apps with Prabhu Eshwarla show all
FREE
You can see any available part of this book for free.
Click the table of contents to start reading.
Become a
Reviewer
Help us create great books

Rust Servers, Services, and Apps you own this product

215  views in the last week
Prabhu Eshwarla
filed under 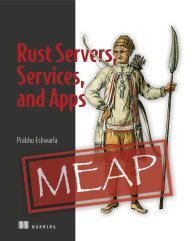 The missing book for anyone that has taken the time to learn Rust but now doesn't know how to apply the language to any real world scenarios.

Look inside
Build backend servers, services, and front-ends in Rust to get fast, reliable, and maintainable applications.

The blazingly fast, safe, and efficient Rust language has been voted “most loved” for five consecutive years on the StackOverflow survey. It’s easy to see why. Rust combines all the features of a modern language with the low-latency power of C. Its efficiency will slash your runtime footprint—and your cloud hosting bills—and its flexibility lets you write network programs and high-level applications with equal ease.

You’ll start with the foundations, using Rust to build an HTTP server, and RESTful API that you’ll secure, debug, and evolve with fearless refactoring. You’ll then put Rust through its paces to develop a digital storefront service, and a single-page client-side application. This fast-paced book is packed with code samples you can adapt to your own projects, and detailed annotations to help you understand how Rust works under the hood.

For web developers who know the basics of Rust and want to start creating applications.

Prabhu Eshwarla has spent over 25 years in the software industry, including time at Hewlett Packard. He specializes in distributed software systems including web development, backend servers, and system tools using open source technologies. He wears multiple hats and works with every layer of the stack.
customers also reading
This book 1° 2° 3°

This is my kind of book! The author takes you through writing a variety of web services in Rust toward a final project.

A clear and pragmatic guide to building services in Rust.