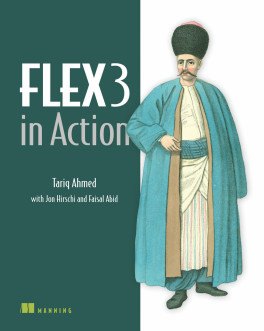 Flex 3 in Action you own this product

this edition is free when you purchase Flex 4 in Action

The code examples are its strength -- plentiful for almost every topic in the book.

Flex 4 in Action is now available. An eBook of this older edition is included at no additional cost when you buy the revised edition!

Flex 3 in Action is an easy-to-follow, hands-on Flex tutorial. Chock-full of examples, this book goes beyond feature coverage and helps you put Flex to work in real day-to-day tasks. You'll quickly master the Flex API and learn to apply the techniques that make your Flex applications stand out from the crowd.

The expert authors of Flex 3 in Action have one goal—to help you get down to business with Flex 3. Fast.

New web applications require engaging user-friendly interfaces—and the cooler, the better. With Flex 3, web developers at any skill level can create high-quality, effective, and interactive Rich Internet Applications (RIAs) quickly and easily. Flex removes the complexity barrier from RIA development by offering sophisticated tools and a straightforward programming language so you can focus on what you want to do instead of how to do it. And now that the major components of Flex are free and open-source, the cost barrier is gone, as well!

Many Flex books are overwhelming to new users—focusing on the complexities of the language and the super-specialized subjects in the Flex eco-system; Flex 3 in Action filters out the noise and dives into the core topics you need every day. Using numerous easy-to-understand examples, Flex 3 in Action gives you a strong foundation that you can build on as the complexity of your projects increases.

Tariq Ahmed is an accomplished web application pioneer having introduced next generation web technologies to companies such as Bell Canada and REUTERS. He and Jon Hirschi were first to introduce eBay to Adobe Flex which later proliferated to other teams. As an Adobe Flex Community Expert, Tariq has been evangelizing the technology and supporting the community through various projects and is particularly known for his Community Flex (CFLEX.Net) site. Tariq is the Manager of Product Development at Amcom Technology.

Jon Hirschi has been innovating with Flex since its first version. As an Adobe Flex Community Expert, he's been sharing his expert-level knowledge through his personal blog, technology magazine articles, and user groups. Jon was also involved in not only the introduction of Flex at eBay, but also in the continuance of it via a cutting-edge command center that allows eBay to manage its servers.

Faisal Abid is a software engineering student in Toronto, Canada and runs his own RIA consulting company (G-uniX Technologies). He's written RIA solutions for various clients including internet startups Buzzspot and RazorCom. Faisal's community involvement includes numerous articles for magazines, and he is known for his experiments with technology. 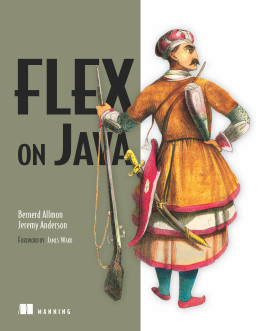 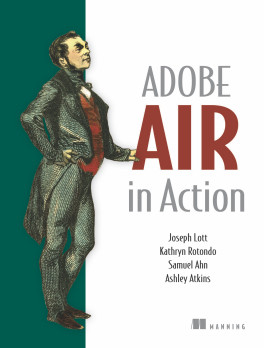 It's my user-friendly tutorial and reference.

An impressive amount of Flex content in a single volume.