Secure APIs from Web Application Attacks you own this product 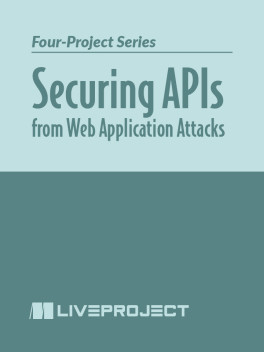 In this series of liveProjects, you’ll go hands-on to secure a potentially vulnerable API from the most common web-based attacks. You’ll step into the role of a developer for Three Cliffs Travel Adventures looking to ensure that your company’s widely used bus ticket booking API is resistant to code-level vulnerabilities identified by the OWASP Top 10 API Security list. Each project in this series focuses on a new type of attack for you to defend against, so you can build a skill set that’s best for your career. 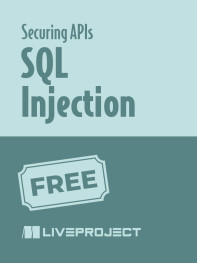 Project 1 SQL Injection Vulnerabilities
In this liveProject, you’ll patch SQL injection vulnerabilities in your company’s bus ticket API. SQL injection is one of the most common ways of attacking a web application, and your challenges will include investigating this code-level vulnerability and applying a fix in the Java code. You’ll get experience using Postman to test your API’s functionality before and after applying your fix. 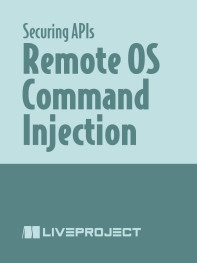 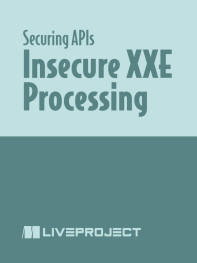 Project 3 Insecure XXE Processing
In this liveProject, you’ll handle XXE processing vulnerabilities in Java code. XXE vulnerabilities are particularly common in Java applications as many XML parsers don’t automatically enable security settings. To handle this vulnerability, you’ll investigate to ensure your XML parsers are correctly set up, and then apply and test a code-level fix to the issue. 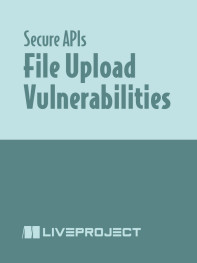 Project 4 File Upload Vulnerabilities
In this liveProject, you’ll tackle the kind of file upload vulnerabilities that allow attackers to upload huge amounts of junk data, overwrite existing files, or even deploy a virus. It is vitally important to test and validate the file upload capabilities in your API implementations. You’ll investigate the bugs that might be causing these issues, and then apply a code-level fix.

Sashank Dara
Sashank Dara, PhD, is a seasoned cybersecurity technologist and expert. He has over 17 years of extensive experience in cybersecurity R&D. He received his PhD in cybersecurity from IIIT-Bangalore in the area of applied cryptography and threat intelligence. He is co-inventor of five U.S. patents (and 3 IETF drafts) in the areas of cloud, SDN, and NFV security. He is a trusted information security consultant and adviser for top companies in EdTech, IT/ITes, academia, and real estate. Dara has published more than a dozen research papers at IEEE, LNCS conferences in the areas of cloud security, privacy, cryptography, and threat intelligence. He is a prolific speaker at security conferences and invited talks. He was a consultant advisor with Manipal Global Education Services for its cybersecurity programs. He was a security technology and strategy advisor for security startups including Appknox, Haltdos, and SecurityJourney.com. Dara is currently the CTO and co-founder of Seconize, an award-winning cybersecurity startup pioneering a cyber risk and compliance management SaaS product suite. 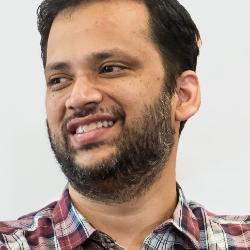 This series of liveProjects is for Java programmers familiar with basic REST API development. To begin this project you will need to be familiar with the following:

In this series of liveProjects, you’ll learn how to spot common code-level vulnerabilities, along with fixes and verification methods.