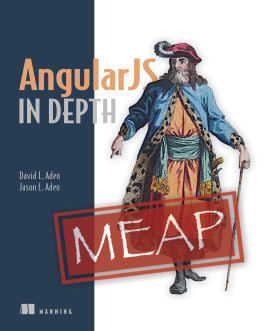 David L. Aden and Jason L. Aden
filed under
We regret that we will not be publishing this title.

AngularJS in Depth is written to take you from beginner to professional so that you can take advantage of the acute need for Angular developers in the job market. By going back to fundamentals, the book dives deep into everything you need to understand to deliver professional single page applications.

If you've worked with Angular at all, you probably love the magical things it does—and hate how hard it is to understand. Angular is a great framework to begin with as long as you stick with existing patterns and copy the available examples. But things start to get tricky when you try to go your own way or to understand how everything fits together.

AngularJS in Depth proceeds from the belief that by better understanding the way Angular runs and performs its magic, we can write better applications faster. It begins with chapters that identify and explain the key pieces that make-up Angular, without expecting you to already be an Angular expert. For example, it demystifies providers, services and factories and the confusing terminology used to describe them. It explores the $scope object in detail and how the $digest cycle uses information stored in $scope to manage two-way binding and respond to event listeners.

Many valuable resources exist that walk you through one or more of Angular's features, but few resources dive behind-the-scenes to explain how it works. AngularJS in Depth is intended for any level of developer who wants to better understand Angular and break through the glass ceiling they may be experiencing.

The book is written for any developer who has tried AngularJS to build a basic app.

David Aden has worked for more than 20 years in high tech, most of that time on web-related projects. He has served as the CTO for a Virginia-based software development company and co-authored two books on web technologies. He has worked as a full stack web developer, team lead and project manager but made the full transition to front-end technologies about three years ago and has been slinging Angular code daily for the last couple of years.

Jason Aden is a software engineer and AngularJS aficionado. He previously built robust server-side web applications until he moved to front-end development and became an expert in JavaScript, Sass, AngularJS and related technologies. He was one of the featured speakers at the first Angular conference held in Salt Lake City in January 2014.

David and Jason have worked with local and federal government agencies, start-ups and Fortune 100 companies.